On the Table | Pull Up Card

Hi everyone! It’s Jeannie (InsideoutJeans) here today with a card I made along with a video showing the process for creating this card. Today, I’m featuring Gerda Steiner Designs, On The Table along with the Hoppiness stamp set. 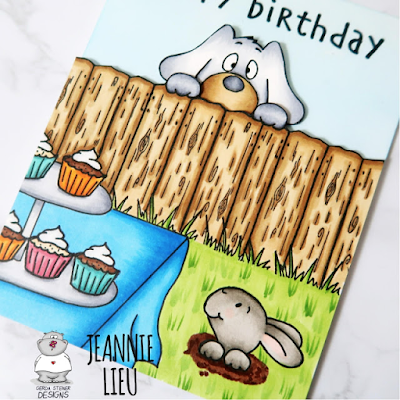 I created a scene card a couple weeks ago featuring the kitty and the puppy peering over a table at some cookies. While creating that card, I thought about the fence in the Hoppiness set. It's one of my favorite accessory pieces in a stamp set since it is super versatile. It's no different for this card as I used it for the dog to peer into a backyard during a cupcake party.
The best part of this card is that the two sets work so well together. The only added piece was that I had to draw in the table for the cupcakes to sit but the scene creates itself.
My original idea behind this card was that the dog would pop up peering over the fence and to create this I needed to mask off the dog so that I have just his two paws over the fence as well as stamping out the dog and drawing in the rest of his face without the paws. 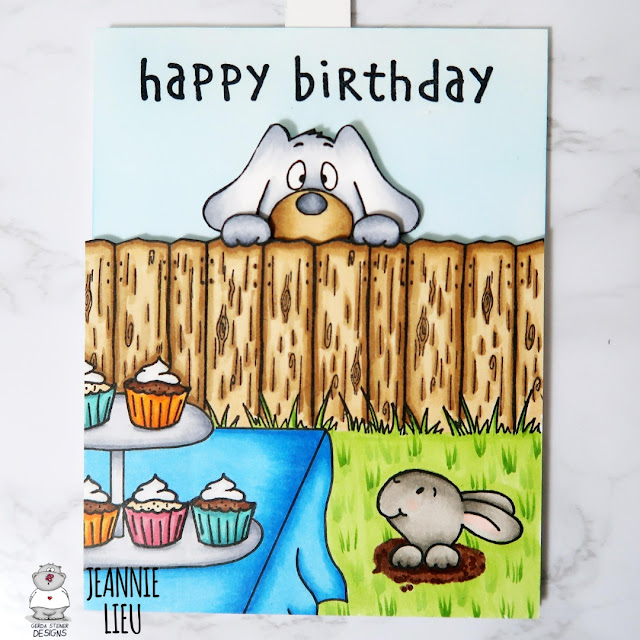 If you are curious about how I created it, I'm including the video link. You'll see that I encounter some issues creating the slider channel for the pull up card but I was able to figure it out. With any card, there are some challenges, but you can normally figure a way to fix it.
When the recipient pulls up the card, the doggie pops up. I also really love that I added the bunny popping out from the ground in the scene as well. It adds a little something extra to it.
Thanks for stopping by! Come back soon! Hi crafty friends,  Noga here and I am so happy to share with you another Thanks a Melon Slimline Card