Hello and thanks for stopping by! It’s Karen here today and I’ve been having a little too much fun with this new stamp set from Gerda Steiner Designs called Happy Holiday Penguin.  I’ve made three cards with it, and because we’re so close to Christmas, I’ve decided to share them all with you today.  So I hope you have your coffee at hand, as this is a rather long post! 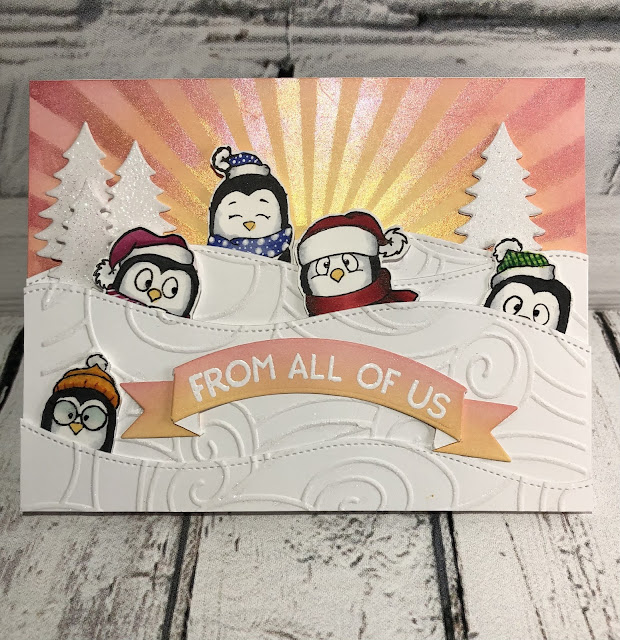 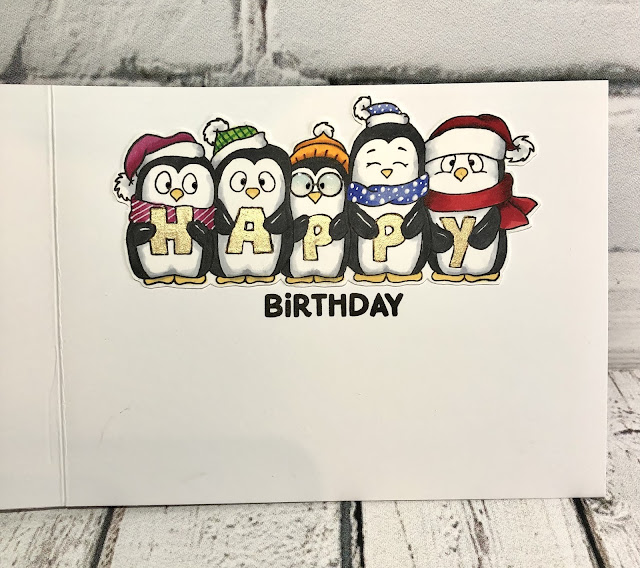 I created the front of this card by ink blending in Distress Oxide ink in Squeezed Lemonade, Dried Marigold, and Worn Lipstick.  I placed a sunray stencil over top (mine was MFT Stamps Radiating Rays), dabbed on some Versamark ink and then brushed on some PearlEx powder which gave it a lot of shine and more colour.  Next, I die cut some snowbanks and dry embossed them (my folder was from Lifestyle Crafts, called Tide).  I used a Nuvo shimmer pen over the raised edges of the embossing.  To get the individual penguin images, I masked off alternating penguins and filled in with a copic multiliner pen as needed. I only coloured in the top of the images as they would be hidden behind the snow. For the banner, I ink blended a scrap of cardstock in Dried Marigold and Worn Lipstick before white heat embossing the sentiment which is from the stamp set.  I added a few trees from Sunny Studios Woodland Borders die set that I had heat embossed with some Hero Arts Sparkle embossing powder.  On the inside, I stamped the “birthday” sentiment from the “Meerkats on the Lookout “ set from GSD before gluing my image above it.  This card would be so easy to adapt to whatever holiday was being celebrated by just changing the inside sentiment. 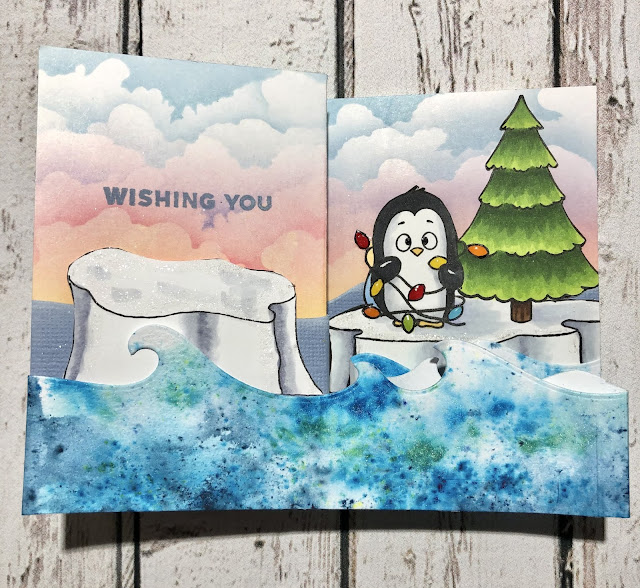 In my second card, I’ve also got the adorable little Tangled Penguin with the other penguins.  I somehow had the idea that these penguins were floating by each other on icebergs, wishing each other a merry Christmas.  Weird, I know!

This is a Double Z fold card so the inside image is hidden from the front of the card when it’s closed.  I’ve made a video previously on how to make this style of card, so if you want more detailed instructions, here is the link to the video.

I ink blended the background sky using the Cloud Edger stencil from A Colorful Life Designs, using Distress Oxide inks in Warm Honey, Worn Lipstick, Shaded Lilac, and Stormy Sky. I die cut a wave border from some blue cardstock I had in my stash and glued that to my card base.  I made the second wave border out of some Brusho crystals and Nuvo shimmer powders and then die cut another wave border.  I needed help with drawing the icebergs, so I pulled out my “Make a Splash” stamp set from Craft Consortium and copied the one there. After copic colouring all my images, I glued them to my card base, being careful to keep the inside iceberg and penguins hidden inside.  The sentiment on the front of the card is from MFT Stamps Bitty Holiday Wishes and I stamped it in Stormy Sky Distress Oxide ink.  Finally, I added some sparkle pen to the icebergs and glossy accents to the Christmas lights. 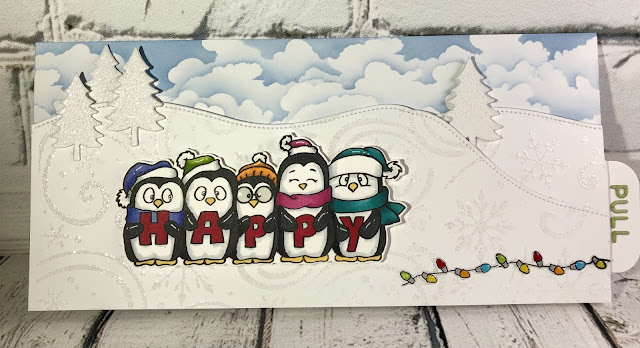 My final card is an 8 x 4” slimline pullout card and again has the Tangled Penguin with the other penguins, only he’s having a little more trouble now! I had intended to make a video for this card but just ran out of time, so I’m hoping the photos will be enough of an explanation.

I used the Cloud Edger stencil and Stormy Sky Distress Oxide ink for the sky.  After die cutting the snowbanks, I used a snowflake stencil (mine is Snowflake Swirls from Echo Park) with Versamark ink, before heat embossing it with sparkle embossing powder. The trees are also embossed with the sparkle embossing powder and are again, from the Sunny Studios Woodland Borders die set.

To create the pull tab, I stamped the “Holidays” sentiment next to the tangled Penguin and then drew some lights through the word in a very tangled pattern with a copic multiliner pen.  I also used the same stencil and embossing powder to add the snowflake swirls to the pull tab.  Next, I added two strips of scrap cardstock at the left hand edge to create a stopper.  Finally, I added the word “pull” on the right edge and corner rounded those edges. 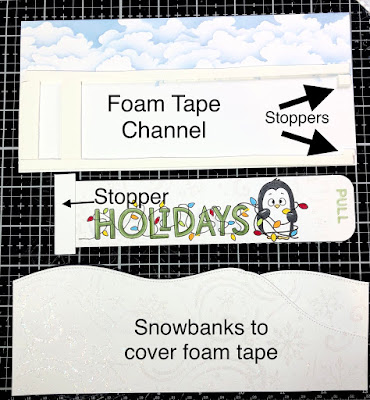 I created a channel for the pull tab by applying foam tape along the bottom edge of the card, and above the upper edge of the stopper on the pull tab.  I also placed foam tape to the left of where the pull tab would stop (so it wouldn’t disappear into the card), and two small pieces of foam tape at the opening edge to prevent the tab from pulling all the way out. 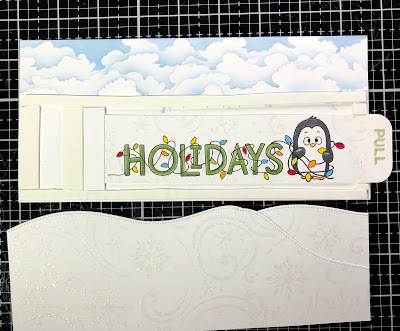 Next, I placed the tab inside the channel, removed the backing paper from the foam tape, and adhered the snowbanks over top to cover all the tape.

I finished decorating the front of the card by adding the holiday penguins, the embossed trees and a little string of lights leading to the pull tab (this was my son’s idea and I loved it!).

If you have managed to stay with me up to this point, huge kudos to you! I’m sorry for this being such a looooong post, but I wanted to share these ideas with you.  Thanks again for stopping by and I hope everyone has a wonderful Christmas!!

Hi everyone! It’s Jeannie (InsideoutJeans) on the blog today with Gerda Steiner Design’s stamp set named, What's up?. It's such a cute set with four different animals and I love their expressions! I stamped and colored these images and decided that I just had to stack them on top of each other because it would be super cute and funny. After coloring them, I fussy cut them out or you can use the co...

Hello everyone, it's Karen here again today.   I’ve got a fun new card fold idea for you today, using the adorable “Pigeons”stamp set from Gerda Steiner Designs. This is a 5” x 7” card that folds flat, but pops out to create a 3D card when it comes out of the envelope. There’s room on the back of the card to write a message and to decorate if you want. I have to give a shoutout to Sam Calcott of...